One more year has come to an end. It has been an amazing year for racing where, defying all the difficulties the world has been experiencing, we saw karting at the best it’s ever been! Top-level of competition, great number of entries on all categories and close racing, added to the wide variety of manufacturers…

After two events in south-western Europe, the drivers and teams involved in the highly regarded Champions of Future Euro Series headed in the opposite direction where the Asum Ring in Kristianstad was the venue for the third round of the 2022 season. In Sweden, the hierarchy changed frequently during the meeting, giving rise to some…

The Champions of the Future Euro Series, favoured by the factory teams and the most successful private international teams, has seen a rewarding increase in participation for its second meeting of the 2022 season, held on the magnificent Zuera circuit. No less than five teams, four chassis and three different engines had the honour of…

128 drivers, 48 nationalities, four days of racing, 34 Qualifying Heats and two suspenseful Finals! Four weeks after the opening of the season in Italy with the Winter Series in Franciacorta, the 2022 season of Champions of the Future has just experienced another exciting meeting in Portugal. The first of the four Euro Series events… 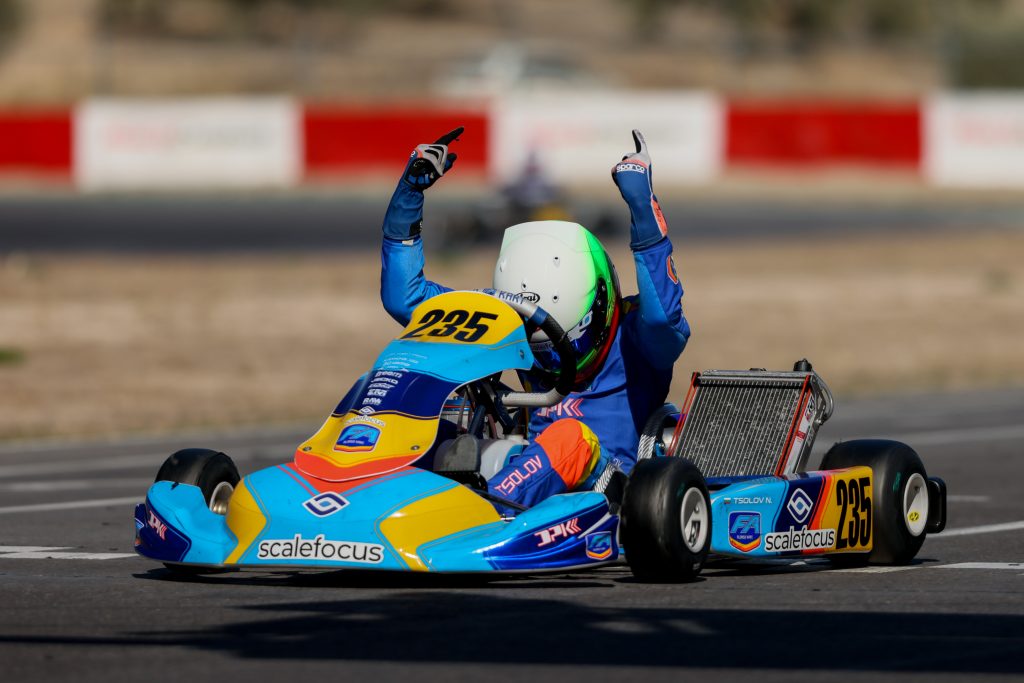 The final round of this year’s Champions of the Future series took place in the sunny Campillos, on the South of Spain, next to Malaga. A record number of drivers took part in the event, with over 60 OK drivers in attendance and the Juniors even exceeding 100 drivers!

The OK category was absolutely dominated by Nikola Tsolov from the Qualifying Practice all the way till the final, with the Bulgarian talent being practically unbeatable. In Junior it looked to be a similar case with David Walther, but in the final Enzo Deligny found that little extra necessary to clinch the victory!

The Junior field recorded the highest number of drivers in a single category in the series’ history, so many that it had to be split into four qualifying groups for the first time. From the first group however, it was clear that David Walther (Koski Motorsport) and Maxim Rehm (Ricky Flynn Motorsport) had set lap times that would be very difficult to beat. Due to the position system however, second place would go to Tomas Stolcermanis (Energy Corse) and third to Jan Przyrowsi (Tony Kart Racing team).

Walther’s blistering speed continued in the prefinal with one more win, but Deligny made another three places to come breathing down his neck. Stolcermanis and Rehm finished third and fourth.

Deligny showed his intentions in the final, quickly overpowering Walther and taking the lead, to drive to victory, while Stolcermanis once again finished third to complete the podium! The big surprises of the race were outside the top-10, where Anatholy Khavalkin (Parolin Motorsport) made up 23 positions from his starting position to finish 12th and right behind him Ean Eyckmans (Kosmic Racing Department) made up 18 places to 13th.

The biggest surprise from the OK category was the absence of Kimi Antonelli, the Italian having moved to Formula 4 and being unable to defend his championship lead. That left Arvid Lindblad (KR Motorsport), Joe Turney (Tony Kart Racing team) and Rafael Camara (KR Motorsport) right behind him in the standings as the favorites! However, it was Nikola Tsolov (DPK Racing) who got the pole position, with Camara second and Gabriel Gomez (CRG Racing Team) making a surprise third place!

In the qualifying heats Tsolov kept setting the benchmark, with camara maintaining second, but Tymoteusz Kucharczyk (BirelArt Racing) taking third. Camara’s title rivals in the meantime, Lindblad and Turney were left making up ground from 12th to 6th place and from 19th to 17th respectively!

Tsolov continued his streak in the prefinal, but it was Norton Andreasson (Ward Racing) who took second place ahead of Camara. The final was one more demonstration of Tsolov’s dominance who went from qualifying to final on the top step. Camara regained second, and it was Lindblad who made a great 5-place comeback to get back on the podium!

Slater and Camara are the Champions!

Slater, due to his great comeback in the final, managed to overtake Kutskov for the title, with Kutskov second and Popov third. The three had such lead in the points that they were able to maintain the top-3 in the championship despite a difficult race where all main contenders qualified far outside the top-10.

In OK, Camara’s strong performance helped him overtake Lindblad for the titles, the latter being on damage limitation after a bad qualifying, while third place went to Tsolov.

The Champions of the Future follows a long tradition of RGMMC productions who have invested in top-level media coverage with live streaming through the weekend, and daily interview and highlights.

All races, as well as interviews and highlights, were made available on the RGMMC Productions Youtube channel. More information and complete results can always be found on the Champions of the Future Series official website www.championskarting.com, the RGMMC Group website www.rgmmc.com, and the Champions of the Future Facebook and Instagram pages with the handle @championskarting.

This year’s great start to the series continued in Spain, with two enormous fields in the two categories battling it on in the heat of Zuera, seeing many leaders, with some surprises adding to the established names! Another fantastic event took place in the Circuito Internacional de Zuera, in Spain, under clear blue skies and…

The 2021 season opened in Genk with enormous fields in the OK Junior and OK categories. All of today’s stars of karting showed their presence at the Belgian track, giving a glimpse of possible future champions of karting and beyond! It was a top-level event hosted at the track of Genk, located in the region…

On the last weekend of October, the international karting community will shift its focus towards one much awaited event: the final round of Champions of the Future at the Kartódromo Internacional do Algarve in Portimao! The best teams and drivers competing in OK and Junior classes are expected in Portugal to give the new series by RGMMC the epic…